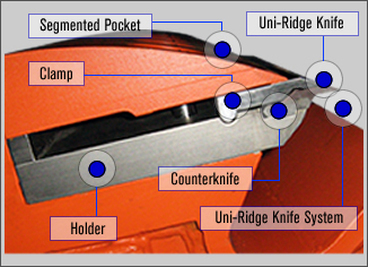 Uni-Ridge Knife
The knife is manufactured from a modified tool steel for exceptional knife life.  An optimal tip to breaker distance enhances chip formation, resulting in improved chip quality.  An oversized single ridge located on the bottom of the knife improves chip flow, and protects the counterknife from wear.  The knife is indexable and rehonable, eliminating the need for grinding and babbitting.

Counterknife
(Holder configurations only)- The innovative counterknife is double-sided for twice the part life.  A bottom key locates the counterknife in the holder, ensuring the knife tip is accurately positioned for a consistent cut.
Holder
The holder is CNC machined from either A514 or 4340 steel (depending on retrofit configuration). A diamond carbide powder is weld-fused to the contact surface ensuring the longevity of the holder in even the most aggressive applications.

Clamp
The clamp is precision ground and CNC machined from 4340 steel. The clamp locates on the holder and on the Uni-Ridge Knife’s top key to produce Bridge Clamping forces.  Bridge Clamping increases knife stability and reduces knife flutter.
Configurations

Cassette Configuration
This configuration uses a simple cassette-style assembly that mounts between the drum and OEM clamp. The Key Knife clamp and counterknife are linked together for accurate clamping. Shim packs are used to adjust knife tip location. No modification to the drum is necessary.
Examples of drum chippers running this configuration: Bruks 820 and 1212 chippers

Holder Configuration
This configuration uses a holder to mount Key Knife clamps and counterknives between the drum and OEM clamp. This unique design allows for the use of an indexable counterknife. Shim packs are used to adjust knife tip location. No modification to the drum is necessary.
Examples of drum chippers running this configuration: Brunette 3230 & 6040 chippers